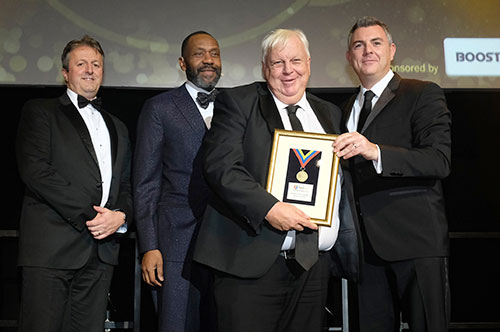 Recognised for its commitment to retailers and securing of 4,500 wholesale retail jobs in the acquisition of Bestway Vans Direct and Conviviality Retail (now Bestway Retail), the leading wholesaler won the coveted ‘Wholesale service to retail’ award.

Bestway also provided instant support and service to Costcutter retailers following the collapse of P&H, thus growing the best-one business from strength to strength and converting 362 retailers from other brands in 2018.

Further, in a fitting tribute on the last night of his 40 year career in the wholesale industry, Martin Race, Managing Director of Bestway Wholesale was recognised with the ‘Special Award’ and entered the stage to a standing ovation, where he made a heartfelt speech.

Martin commented: “The FWD has progressed our industry leaps and bounds in recent years and it’s an honour to be recognised by the Federation on my last night as Managing Director of Bestway Wholesale.

“It’s fitting for Bestway to have won the wholesale service to retailers accolade in what has been a turbulent year for the sector. Bestway has managed to strengthen its leadership in retail with acquisitions which have given us representation across company-owned, franchise, symbol group, retail club and unaffiliated retail.

“I wish Dawood the best of luck in his role and leading the business to win the Wholesale Service to Catering award in the future.”

Not to be overlooked, are the shortlisting of Bestway Wholesale in three further categories:

Leading Bestway’s Park Royal Depot team, Ejaz Ali said: “I am immensely proud of my team in our Abbey Road Branch which is our Flagship depot.”

Steve Wilkie, shortlisted for the Delivered Depot Manager Award, commented: “This has been a year of expansion for the depot which is set to progress in 2019, and we are all looking forward to the challenge.”

Commemorating 100 years since its inception, the FWD celebrated outstanding people, products and services in the wholesale sector at Old Billingsgate, London.

On making the shortlist for the Telesales Executive Award, Louise Thompson, added: “Customer service is at the heart of what I do and I would like to thank the fantastic team and customers who make Bestway’s Perth Contact Centre such a great place to work.”